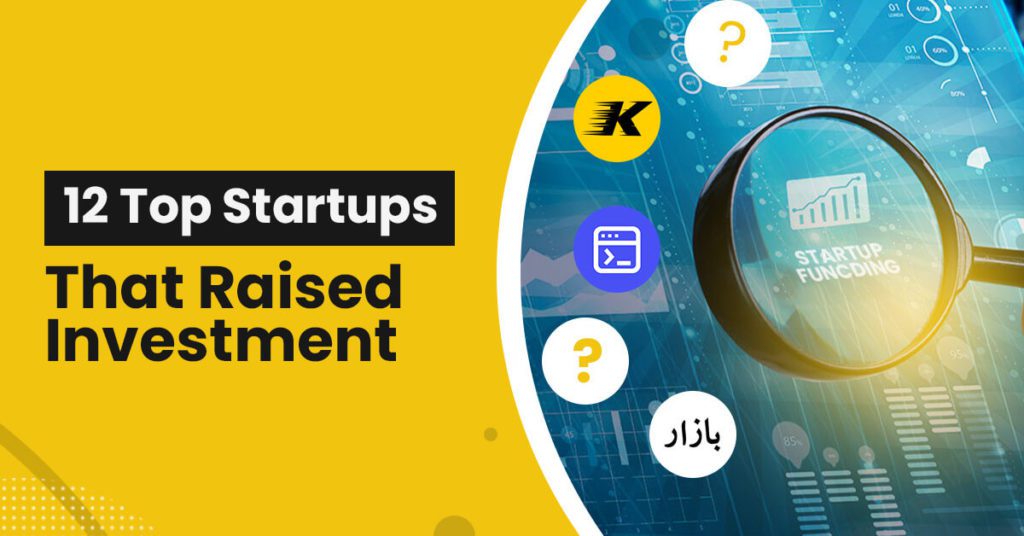 When we hear discussions of Series A, Series B and Series C funding rounds, these terms refer to the process of growing a business through investments. Here is a list of top 12 Pakistani startups that raised investment.

Our member Krave Mart is a Karachi-based startup ready to revolutionize Q-commerce by delivering products within 10 minutes. The startup has announced Pakistan’s largest pre-seed funding, worth $6 million, led by some of the most iconic investors who previously invested in companies like Delivery Hero, Gorillas, Meituan, Rabbit, Kitopi and Zeptos etc.

The startup’s mission is to ensure delivery of quality products within 10 minutes to help people save their time and energy spent on grocery shopping. They believe that Quick Commerce will redefine how shoppers shop for groceries in Pakistan.

Our member Bazaar is a B2B E-commerce and fintech startup that has raised $70 million in a Series B round led by Dragoneer Investment Group and Tiger Global. Previously Bazaar raised $30 million in Series A by existing investors including Indus Valley Capital, Defy.vc, Ancrew Capital, Wavemaker Partners, B&Y Venture Partners, and Zayn Capital. Bazaar’s total funding adds up to over $100 million making it one of the best-funded startups in Pakistan.

The startup is building an operating system for traditional retail. They offer ecommerce marketplace that helps retailers get an inventory for their stores, a software known as Easy Khata as well as a short-term working capital financing product called Bazaar Credit. The marketplace serves in 21 towns and cities in Pakistan with 3-4 new additions every month.

A Lahore-based B2B E-commerce marketplace, Tajir, has raised $17 million in a Series A round led by one of the top American VC firms Kleiner Perkins. This is the first ever investment by American VC in a Pakistani startup. The round also included participation of Y Combinator Continuity Fund, AAVCF, Fatima Gobi Ventures, Flexport, Golden Gate Ventures, Liberty City Ventures, VentureSouq, and angel investors including Flexport CEO Ryan Petersen and Figma CEO Dylan Field.

Founded in 2018, Tajir sells inventory to local kiryana stores through a mobile app. The startup has over 1,000 SKUs including soft drinks, snacks, toiletries, and food staples like rice and wheat. With the latest funds, Tajir plans to expand to Karachi as well.

Our member Educative is a hands-on skill development platform for software developers and their employers. The startup announced a $12 million Series A fundraising round recently. Matrix Partners led the round with an additional funding from new and returning investors, including Trilogy Equity Partners. Lookout founder Kevin Mahaffey, Mercury.com founder Immad Akhund, Segment founder Ilya Volodarsky, and several other angel investors also participated.

Educative has more than 550,000 developers using their platform, and an additional 1.5 million monthly learners that tap into the free database for short articles on development topics. The infusion of funding will enable Educative to accelerate its growth in the B2B space where companies including LinkedIn, Samsung, and VMware leverage the company’s exclusive technology to onboard new engineers, upskill existing ones, and develop their engineering managers. The company plans to hire more than 200 new employees to fuel growth across their global customer base.

Pakistan’s leading e-ticketing platform with over 4.6 million registered customers in transportation and the entertainment industries has raised around $7.5 million in Series A funding round. The round was co-led by Zayn Capital, seed investor Lakson VC and UAE-based Hayaat Global with participation from MENA based BY Ventures and Jabbar Internet Group, New York based Millville Opportunities and Silicon-Valley based Mentor’s Fund.

The fully-integrated platform allows customers to easily book with a click of a button. Their plug and play distribution system interconnects reservation systems of intercity transportation, domestic and international airlines, hotels and entertainment events.

Airlift has raised $85 million in the largest-ever funding round for a Pakistani startup. The round, including high-profile investors, is also the largest Series B raised by any startup in the Middle East and North Africa.

Founded in 2019, Airlift started as a mass transportation startup but had to halt its operations in March 2020 due to Covid-19. That is when the company launched a 30-minute grocery delivery platform now available across eight cities of Pakistan. In addition to groceries, Airlift also delivers fresh produce, OTC, prescription medicines, and sports goods, from its network of multiple fulfillment centers across the cities it operates in.

The online pharmacy startup Dawaai has raised $8.5 million in a round led by 500 Startups, taking its total financing to date to $10.5 million. The startup told MENAbytes that the equity accounts for a significant majority of the round.

Founded in early 2014, the startup sells medicines, personal care products, and medical equipment to individuals and pharmacies across the country via website and mobile app. Working directly with the pharmaceutical companies, Dawaai solves the problem of counterfeit products in the market. Customers can order medicines by uploading their prescription or by adding manually to the cart for a doorstep delivery. For prescription medicines, a user must upload a prescription for order completion.`

QisstPay has secured $15 million in seed and pre-seed funding. The round was led by MSA Capital and featured institutional investment participation from Global Founders Capital, Fox Ventures, and First Check Ventures – as well as strategic angel investments from Scalapay co-founders Simone Mancini and Johnny Mitrevski.

QisstPay was founded in November 2020 to solve a basic problem for consumers in the emerging market economies. Many citizens in the developing countries cannot use consumer financing or credit card facilities common in the developed countries. This impacts not only their ability to purchase recreational and luxury goods, but also impairs their access to everyday necessities. Co-founder and CEO Jordan Olivas explained: “After moving here to Pakistan, I noticed how badly the people of this country need a financial tool to help them purchase goods and services that they not only want, but actually need.”

The digital freight marketplace BridgeLinx has raised $10 million in the country’s largest seed round. The round was led by Harry Stebbings’ 20 VC, Josh Buckley’s Buckley Ventures, and Indus Valley Capital.

Founded in 2020 BridgeLinx helps businesses, mainly large manufacturers and retailers, move freight by connecting them with carriers (truckers, owner-operators, transporters, and private fleets) through its online marketplace. The startup claims to have onboarded thousands of carriers who are moving thousands of shipments every week for some of the largest shippers in Pakistan.

CreditBook is a Karachi-based fintech that has raised $1.5 million in a seed round. The investment came from a mix of local and international investors, with Pakistan’s BitRate VC and Dubai-based VentureSouq leading the round. Better Tomorrow Ventures, Ratio Ventures, and Toy Ventures participated in the round, marking their first investment in Pakistan. Quiet Capital, i2i Ventures, and angel investors including founders of Indonesia’s BukuWarung and Colombia’s Rappi were also part of the deal.

CreditBook wants to digitize the small businesses in Pakistan. They’ve started with a digital ledger app that helps the Micro, Small, and Medium Enterprises (MSMEs) manage their finances. Launched in June 2020, CreditBook’s mobile app has already over 500,000 downloads on Play Store, observing 450 percent growth in the last six months. It is available in six local languages.

Founded in 2016, GrocerApp helps users to orders groceries for same-day delivery through its web and mobile apps. Started with Lahore, GrocerApp had expanded to Islamabad, Rawalpindi and Faisalabad. GrocerApp claims to have grown 300 percent in terms of monthly orders and revenue. Its annualized revenue, the startup said, now exceeds $15 million.

Starting with a digital wallet and a debit card, SadaPay aims to build a “neobank” for Pakistan. Currently available in private beta, its mobile wallet is one of the most anticipated fintech products in the country, with over 200,000 people on the waitlist. It launched the private beta a few months ago after receiving in-principle approval from the country’s central bank. In this pilot phase, SadaPay is allowed to operate with a maximum of 1,000 customers. 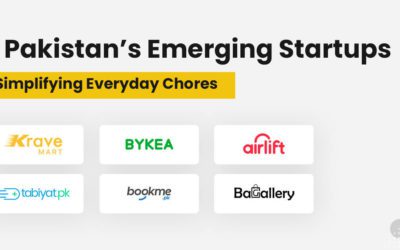 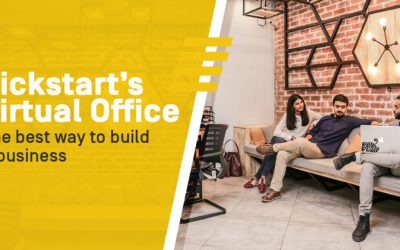 Kickstart’s Virtual Office – The Best way to Build a Business 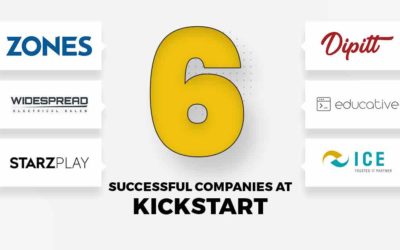 6 Successful Companies Based at Kickstart